In recent days, white supremacists have crawled out from under rocks, meth labs, and sun umbrellas for their decennial pilgrimage in search of Vitamin D and a good ass-kicking. Much like the cicada, white supremacists gestate underground as larvae, emerging every 13-17 years to annoy the fuck out of everyone until they’re crushed beneath the rubber boot of humanity.

While supremacists ostensibly represent the lowest rung of human evolution, there are a few areas in which their supremacy is truly unrivaled. 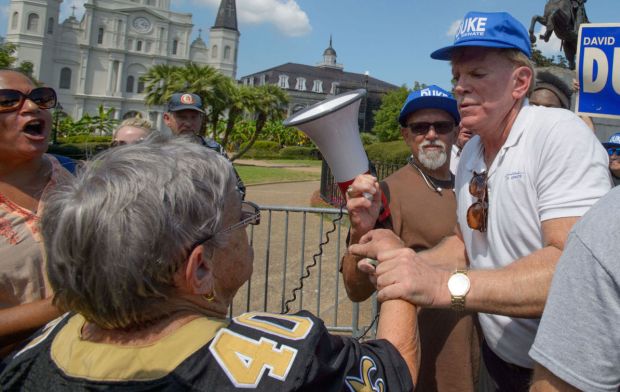 David Duke struggles to best an old woman in an arm-wrestling match.

1. Tucking T-Shirts into Cargo Shorts
This one goes without saying. No one tucks a t-shirt into a pair of khaki cargos like a white supremacist. They are the undisputed champions. Now pop on a bicycle helmet and you’ve got yourself one hip Nazi fuckhead.

2. Gingivitis
Gingivitis is a very popular periodontal disease in the white nationalist movement. This inflammation of the gums often leads to tooth loss and halitosis. Begging the question, is that a gum disease I detect, or the sweet aroma of racial superiority? It’s gum disease!

3. Medieval Armament
When it comes to slapping xenophobic logos onto wooden shields and prancing around like a Klan-sponsored LARP convention, white supremacists are dominating. Add the bludgeons and obscure flags, and that places them squarely in the Middle Ages alongside their beliefs. 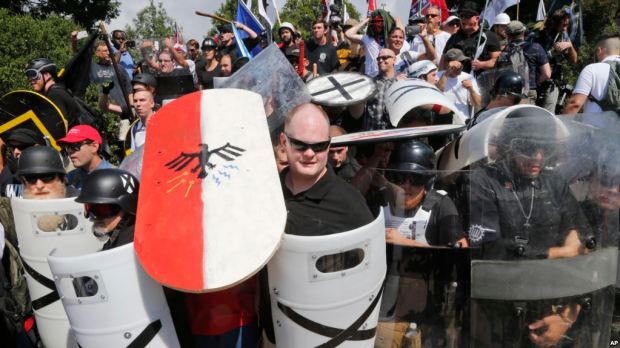 4. Crew Cuts
Co-opting this haircut might be the only public service they’ve ever done. When Nazis get ahold of something, its popularity really tends to take a hit. When’s the last time you saw a Hitler mustache? Now if they could only get their grimy hands on hoverboards, Snapchat’s dog filter, and the phrase “Sunday funday.”

5. Drinking Paint Thinner
Paint thinner, Listerine, hydrogen peroxide—if it’s a liquid and it’s not meant to be ingested, white supremacists can drink you under the table.

6. Badminton
They’re just genuinely awesome at it for some reason!

7. Buying Tiki Torches in Bulk
Maybe they spotted a great deal on Amazon, maybe they purchased the unused supplies from Fyre Festival. Either way, who else can turn fun household light sources into a symbol of putrid hate overnight like the alt-right?

Worst season of Survivor ever.

8. Shouting Racial Epithets While Keeping a Dip In
Horrendous, sure. But it’s also a unique skill possessed solely by white nationalists. In fact, these Nazis can accomplish a whole host of disgusting feats while chewing tobacco—vandalizing synagogues, eating at Chick-Fil-A—all without spilling a drop.

9. Possessing Pheomelanin
No Eumelanin for these skinheads—they’re all Pheomelanin, all the time. It’s the Pheomelanin that keeps the white supremacists so white. And while everyone has some of both pigments, they have slightly more of one. Umm, winning!

10. Courting Cowardly Egoists Who, Owing to Their Own Narcissism and Insecurity, Cannot Bear to Lend Even the Most Tepid Condemnation of Nazis—Fucking Nazis—Because They Once Said Something Nice About Him and It Warmed His Soul in a Way That Money and Power Never Could, Likely Due to a Dearth of Actual Love During His Stunted Upbringing, an Upbringing in Which He Was Continually Taught of His Own Supremacy Over Others, Until Only a Shadow of Doubt Remained in Him, and, While Only a Shadow, It Seemed to Gnaw at Him and Goad Him into Making Certain Everyone Knew How GREAT He Was Because If Everyone Saw It Then His Fear Would Be Abated and He Could Finally Feel Whole and Pure and Important, Which, in Effect, Sounds Pretty Similar to Those Guys, What Do You Call Them, With the Hoods and Whatever, They’re Really into Racism and Thinking They’re Better Than Everybody, Shit, This Is Really Going to Bug Me.

Desperate for your approval: